Obj and MTL files in Bryce

Files needed are here in one zip: Glass2 3ds and obj, glass2.mtl, empty.mtl and Glass20.jpg

Here's some info on material (*.mtl) files - you can open one up using notepad if you like but I have a description below.
*.mtl (material information) files don't really load in Bryce.
They are used as import info (read from the object file itself) when the object has color and other values as well as paths or names to picture texture files associated with it.
You can use an empty text file re-named default.mtl to avoid errors and reduce file weight if you're going to do all you texturing in Bryce  - see the .empty.mtl one attached in a text editor.
0 bytes and no calories....hahahaha
If there isn't one with the object you can use any *.mtl file with any object..
If a *.mtl is in the same folder as the object model Bryce doesn't tell you it found it ;  )
Note: An *.obj can be made without a mtl file and still have color info and other characteristics embedded into the obj itself.
If this is the case it will import without error.
But, If there's a picture file (jpg let's say) named in the mtl file you will get a dialog in Bryce asking where the mtl file is. 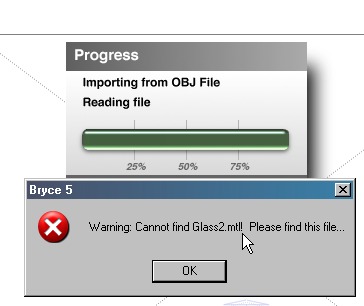 If the mtl file is not found you will get the infamous i/o error and the model won't load.

Use the files in the glasses.zip above
Copy the Glass2.obj only to your desktop and try to import it into Bryce, you will get errors because the Glass2.mtl and Glass20.jpg are not found in the same directory.
Try again with the Glass2.mtl and Glass20.jpg copied to your desktop also.
If all the files needed are in the same folder it will import fine.
The mtl file is needed because it refers to an external file type - the Glass20.jpg
You still have to manually load the jpg via LEO and apply it as was mapped in c4d.
The Glass20.jpg was used as a reflection map so all that has to be done is to load that into the ' D ' column Optics section in Reflection.
The color info and jpg name was 'read' from the mtl file and it worked because Bryce didn't have to go 'looking' for it.
Have a Martini on me 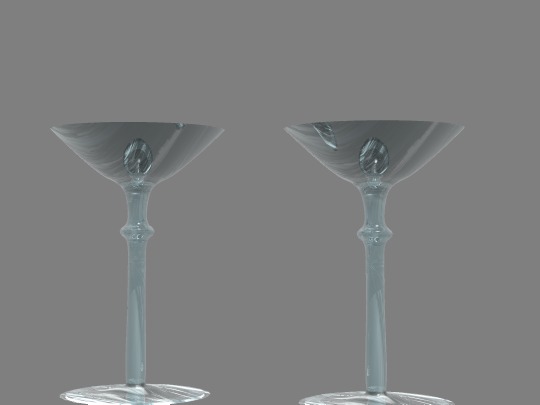